Disney (DIS) is the latest S&P 500 company to suspend or cut its dividend to save cash amid the coronavirus stock market crash. And the cost is starting to add up — for you.

And it’s not just billionaires and tycoons taking the hit. Just the opposite.

Dividend cuts will sting mainstream mutual fund and ETF investors, not the uberwealthy, the most, reveals an Investor’s Business Daily analysis of data from S&P Global Market Intelligence.

Retirees, pensioners and other investors often rely on investment and dividend income. It’s also an important source of returns for retirement plan investments in 401(k)s and IRAs.

That money is shrinking. 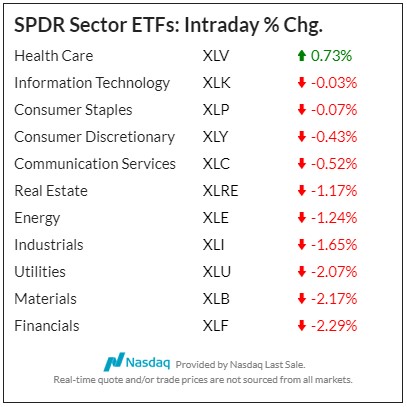 S&P 500 Dividend Cuts Are Mounting For The Masses

It’s tempting to assume dividend cuts only hurt the well-heeled. But a closer looks shows that’s not the case.

Mutual fund and ETF companies are the No. 1 holder of shares in three-quarters of the S&P 500 companies that cut or suspended their dividends this year. Think Vanguard, Capital Group’s American Funds, T. Rowe Price (TROW) and State Street Global.

Individual billionaires are only the top holders of three of those dividend-cutting S&P 500 companies.

In fact 19 of the S&P 500 companies that cut dividends this year are in the consumer discretionary sector. These include some of the stocks most widely held by individual investors, like Ford (F), General Motors (GM) and Harley-Davidson (HOG).

Two of the dividend cuts are from members of the ProShares S&P Dividend Aristocrats ETF (NOBL). That’s an ETF popular with investors that count on companies with consistent multidecade records of dividend hikes.

Boeing‘s (BA) suspension of its $8.22 a share dividend is the most costly of the bunch. That dividend cut is costing investors $4.6 billion annually. And, as with the others, it’s not the rich and famous taking the hit.

More than 85% of the company is owned by traditional investment managers like mutual funds found in 401(k) plans. Vanguard is the largest owner of Boeing stock with 7% of shares outstanding. The suspension will cost Vanguard investors alone $335 million a year. Boeing employees, in a pension, own 5.4% of the company. The lost dividend costs these workers more than $250 million a year.

‘It’s A Small Dividend After All:’ Disney Halts S&P 500 Dividend

Disney’s dividend got a whole lot smaller. This week, Disney alone put its $3.2 billion annual dividend on pause for the first half of the year. That costs S&P 500 investors $1.6 billion.

And Disney in many ways shows the pain is felt by Main St., not Wall St. Again, Vanguard is the largest holder of Disney stock with 7.4%. Halting the 88 cents a share first-half dividend is costing Vanguard investors $118 million. And double that if the dividend isn’t reinstated this year.

So before you cheer dividend cuts or jeer S&P 500 companies that keep paying them, just know you’re likely one of the biggest recipients. 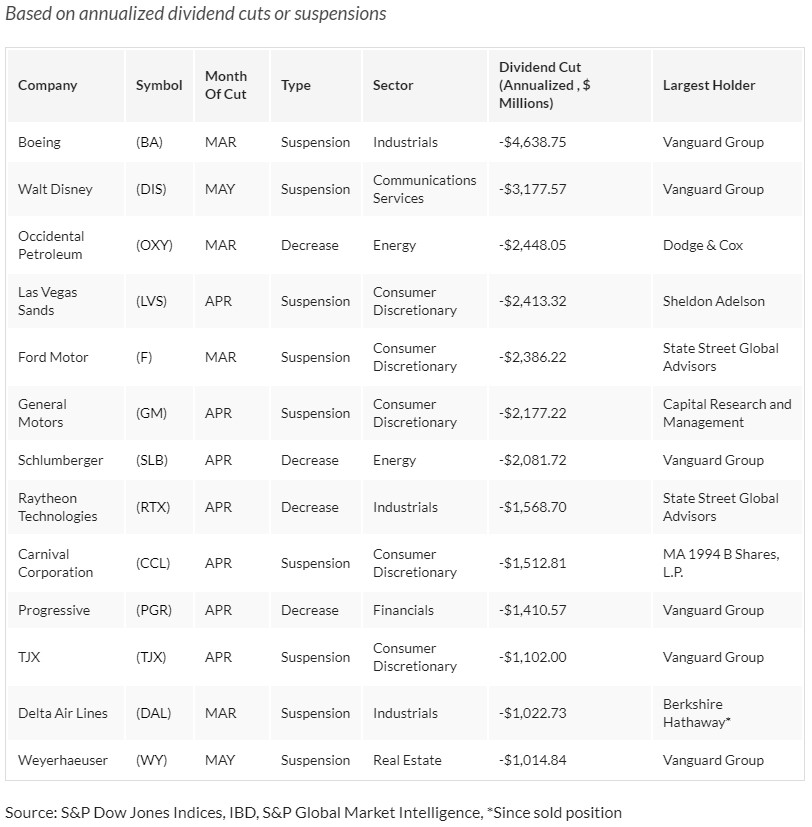