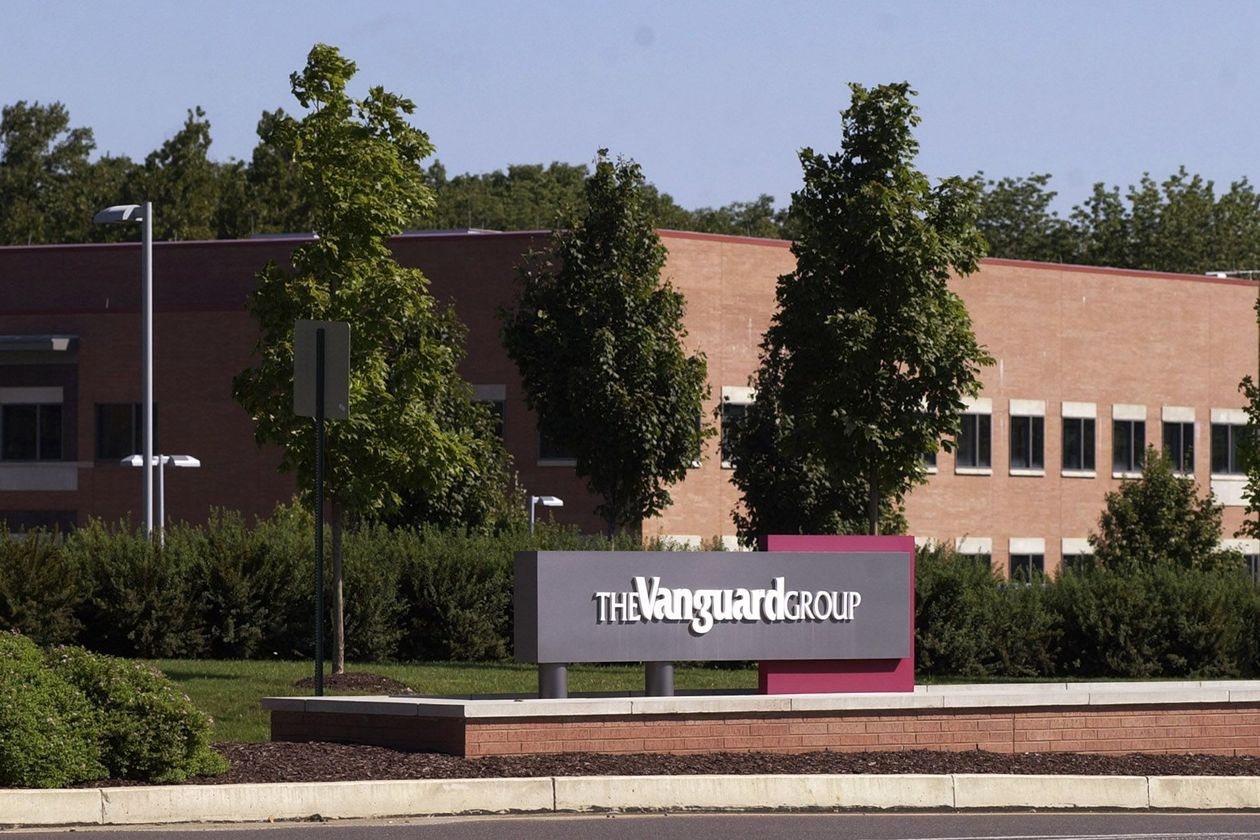 Have individual investors missed out by not having access to private equity? In weeks like these , when publicly traded stocks are getting clobbered, it might seem so.

We’re about to find out the answer, courtesy of Vanguard Group’s recent decision to create a private-equity fund. Though the fund initially will be available only to institutions such as college endowments and nonprofit foundations, Vanguard says it eventually will be made available to individuals as well.

Private equity, of course, refers to equity investments in companies that aren’t publicly traded. Because these investments usually are sizable, their holding period can be many years, and the risk of failure isn’t insignificant. They typically are made by private-equity firms that pool the resources of wealthy and well-connected individuals and institutions. There usually is a very high minimum to invest in these firms, which charge hefty fees, typically 2% of assets under management and 20% of profits.

Even after taking such hefty fees, however, many PE funds have delivered outsize returns to their investors and helped to cement the reputations of many investing gurus. One that many investors are familiar with is David Swensen, who has managed Yale University’s endowment since 1985 and been a strong proponent of alternative investments generally and private equity in particular. According to Yale, Swensen has produced a return that is “unequalled among institutional investors.”

Until now, about the only investment options for individuals wanting to get exposure to private equity were the stocks of those few PE firms that are publicly traded, such as KKR (ticker: KKR) and Blackstone Group (BX). Another option has been those exchange-traded funds that invest in a basket of such publicly traded PE firms, such as Invesco Global Listed Private Equity (PSP), with a 1.78% expense ratio, and ProShares Global Listed Private Equity (PEX), with a 3.13% expense ratio.

Many of the details of Vanguard’s new fund have yet to be made public , such as when the fund will become available, the minimum investment amount, the fees that would be charged, and how long investors would be required to tie up their assets. Vanguard declined a request to provide those details. The new fund will be run via a partnership with HarbourVest, a private-equity firm.

Here are some considerations to keep in mind if and when you are given the chance to invest in Vanguard’s new fund.

• Fees. Ludovic Phalippou, a professor of financial economics at Oxford University, told Barron’s that he’s worried about the layers of fees that potentially could be charged by this new fund—as many as three, in fact: From the PE funds in which HarbourVest invests, from HarbourVest itself, and by Vanguard.

With that many layers of fees, he adds, this new fund would be a “nail in Vanguard’s purpose coffin,” since the firm was founded by Jack Bogle with the goal of minimizing fees.

• Does private equity beat public stock markets? The answer to this question may very well be “no,” says Erik Stafford, a professor of business administration at Harvard Business School. He bases his skepticism on the disappointing performance of the largest category of PE funds, so-called “buyout funds,” which purchase publicly traded companies and take them private.

To be sure, he says, the average PE buyout fund has outperformed the S&P 500 index. But that’s an inappropriate comparison, since the typical PE buyout firm invests in companies that are in the so-called small-value category. These are stocks of companies with small market caps that trade for low ratios of price to earnings, book value, return on equity, cash flow, and so forth. Such stocks are at the opposite ends of the size and growth-value spectra from the S&P 500.

According to Stafford, the average PE buyout fund has lagged an index of small value stocks. Oxford’s Phillapou said that his research has reached the same conclusion. 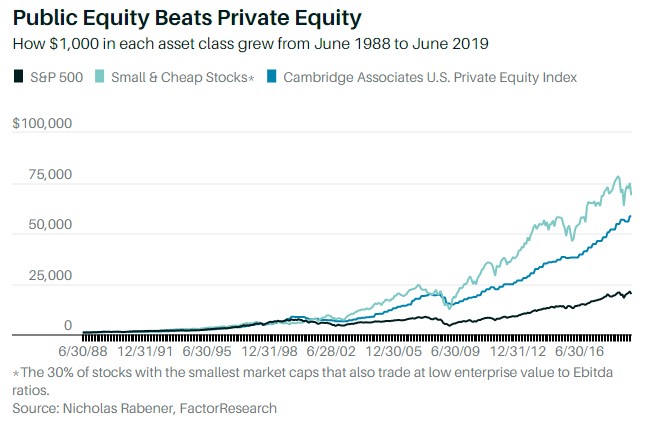 Take a look at the accompanying chart, courtesy of data from Nicolas Rabener, founder of the London-based firm FactorResearch. Over the past three decades, private equity has significantly outperformed the S&P 500, but it has significantly lagged a hypothetical index fund of small-cap value stocks. (For private equity’s performance, Rabener relied on the Cambridge Associates U.S. Private Equity Index, which is compiled from “more than 1,500 institutional-quality buyout, growth equity, private equity energy, and subordinated capital funds formed between 1986 and 2019.”)

To be sure, not all researchers agree. Greg Brown, a finance professor at the University of North Carolina at Chapel Hill and director of its Frank Hawkins Kenan Institute of Private Enterprise, told Barron’s that his and others’ research has found that, on an apples-to-apples comparison basis, PE beats public equities by an annualized margin, or “alpha,” of about 3%.

Though you needn’t take sides in this disagreement, its very existence should give you pause. If PE’s much-vaunted alpha is so dependent on methodological complexities in its measurement, then perhaps it isn’t something you should be so eager to pursue.

• Does private equity really have a low correlation with the stock market? Even if PE’s alpha is zero, it still could play a valuable role in a diversified portfolio—provided its returns are uncorrelated with those of publicly traded equities.

In that case, a stock portfolio divided between public and private equities should produce long-term performance that is just as high as public market equities alone, but with less volatility or risk. That would enable a risk-averse investor to allocate more to equities than he or she would otherwise be comfortable with.

At first blush, as you can see from the accompanying chart, PE certainly appears to be uncorrelated with public equities. Unfortunately, appearances can be deceiving: The apparently low correlation is largely an artifact of the illiquid securities in which PE funds invest. Those funds have a lot of discretion in deciding how to value them each month or quarter, and the inevitable result, according to Rabener, is that their returns appear to be smoother over time than they really are. He says he’s confident that, if there were any way to value PE funds as frequently as publicly traded firms, they would be just as volatile (if not more so).

• Is there a illiquidity premium? Some argue that, according to investment theory alone, PE funds should outperform public equities because of their illiquidity. These theorists are referring to the lengthy lockup period that PE funds place on assets invested in them. Investors should receive a higher return as compensation for not having instant access to their assets—an illiquidity premium, if you will.

Or so the theory goes.

But Cliff Asness, founding principal at AQR, argues it’s possible that not only is there no such premium but there actually may be an illiquidity discount. His argument is that investors are willing to accept a lower return in PE because its high volatility is hidden from plain view. Publicly traded equities, in contrast, “smack you in the face” with their day-to-day volatility, so they are the ones deserving of the higher return.

In a recent blog post, Asness mused: “What if many investors actually realize that…illiquid, very infrequently and inaccurately priced investments made them better investors as essentially it allows them to ignore such investments’ given low measured volatility and very modest paper drawdowns?…What if investors are simply smart enough to know that they can take on a lot more risk (true long-term risk) if it’s simply not shoved in their face every day (or multi-year period!)?”

Professor Stafford agrees. He said that PE’s illiquidity premium, which has been much ballyhooed by PE’s cheerleaders, is actually “zero or even negative.”

The bottom line: A completely rational, unemotional investor might very well choose to invest in a portfolio of publicly traded small-cap value stocks rather than in PE. But if you are unable to live with this portfolio’s volatility and downside losses, and therefore are the kind of investor who ends up throwing in the towel at the bottom of bear markets, you may end up worse off than if you instead invested in a statistically inferior PE fund whose volatility is hidden and with which you can actually live through thick and thin.

So the absence of an illiquidity premium isn’t an automatic reason to avoid private equity. But if that’s why investors are favoring PE funds, Asness argues, “they should be open-eyed about what they are doing.”