These are just some of the many ways many Americans are making it work when money is tight. For about a third of Americans, this is a regular financial stress, with 32% running out of money before their next paycheck hits, according to a new survey fielded by Salary Finance of over 2,700 U.S. adults working at companies with over 500 employees.

Amy,* 36, is intimately familiar with running short on cash and using these workarounds, especially during tax season. That’s in spite of the fact that she and her husband make about $50,000 a year, just short of the average household income in the U.S.

“Tax time hurts for us because we don’t get a refund, we get a bill,” she tells CNBC Make It. Her husband, the primary earner, works for a company in a different state, so state income taxes aren’t taken out, she says. While they typically get a federal refund, they end up owing the state more than the federal refund. 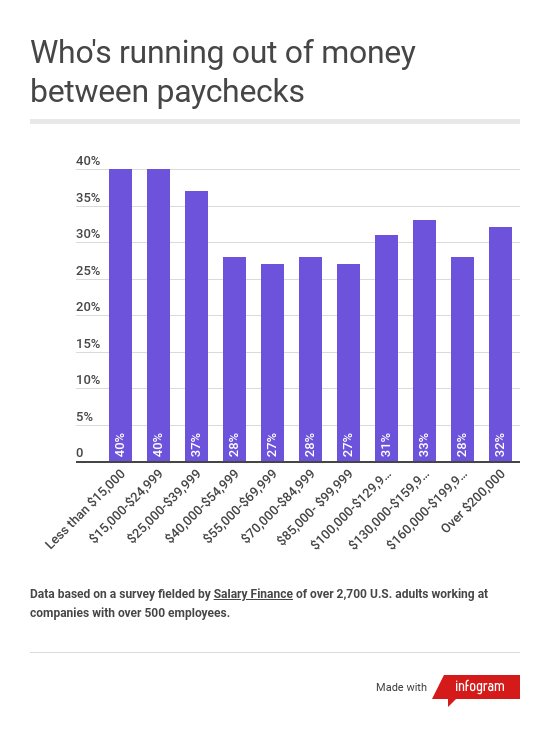 Salary Finance compared the percent of working American who said they run out of money before payday “most of the time” or “always” among different income levels.

“We never have a lot, but spring, summer and fall we can usually get what we want at the grocery store,” Amy says. The hard times start pretty much as soon as winter hits because the heat bill goes up, and she and her husband know tax time is coming soon. It’s back to cutting corners at the grocery store, or hitting up the fresh food giveaways that occur in their region of central New York.

This year, they’ve opted to also cut down on some of her husband’s CPAP machine supplies in an effort to find ways to save. “We’ve been fortunate to not have many unexpected bills pop up over the past couple years, so we’ve been able to hold fairly steady lately. But it’s scary, of course,” she adds, saying she’s fearful they’ll need a new roof soon — a huge expense.

Contrary to popular belief, “this is not just an issue for people at the lower end of the income spectrum,” Dan Macklin, Salary Finance’s U.S. CEO and co-founder of SoFi, tells CNBC Make It. About 31% of respondents earning over $100,000 also regularly experience a budget shortfall before payday.

For many, it’s the rising cost of living — including food, housing, education and medical expenses — that creates the squeeze. Over the past year, basic costs increased by 2.3%, according to the Bureau of Labor Statistics’s Consumer Price Index. The cost of medical care rose 4.6% in 2019, the largest year-over-year increase since 2007, the BLS reports. Housing also jumped 3.2% last year, while education expenses rose 2.1% and food prices increased about 1.8%. 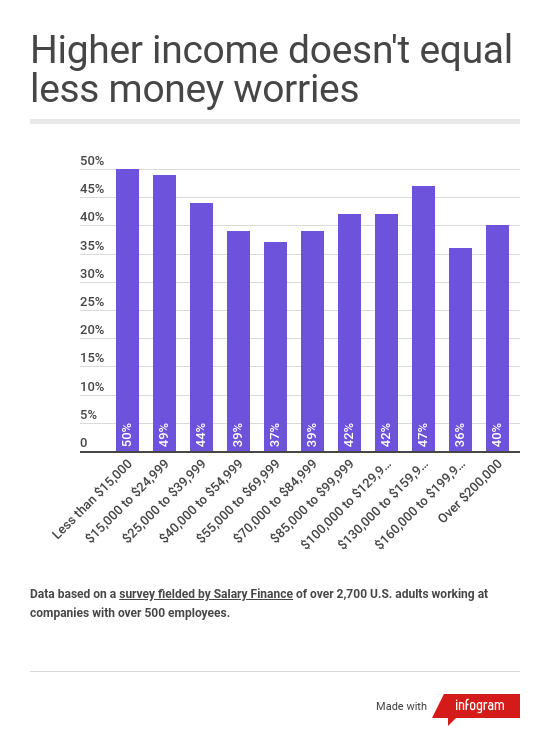 Salary Finance compared the percentage of respondents who say they have money worries among different income levels.

No matter the underlying reason, the struggle to pay bills and put food on the table when you’re short on cash leads to a lot of stress, the survey finds. Financial stress is very prevalent today, with 42% of working Americans experiencing it. It’s a percentage that Macklin finds “extremely worrying.”

That’s because that financial stress can have lasting effects on your mental and physical health, he says. Those with financial worries are six times more likely to suffer from anxiety and seven times more prone to depression, Salary Finance’s survey found.

Build up a savings cushion

Setting up regular, automatic transfers from your checking account to a savings account will help grow your emergency fund over time. If you’re tight on money at the moment, start small with just $5 a day or $5 a week. And consider a high-yield savings account, which typically pays higher interest that compounds over time.

That may be easier said than done for those who are routinely running short on cash. Almost half of working Americans surveyed by Salary Finance, 48%, say they don’t have any money specifically set aside for emergencies.

But having a source of savings can not only save you from getting into high-interest credit card debt or other high-cost loans, it can help your mindset. Those who consistently save experience less financial stress, according to the survey.

Many times, finding ways to save money from your monthly budget comes down to planning in advance. Trying to save up a few thousand dollars on the fly can seem daunting, but finding small ways to save over time can be easier.

In Amy’s case, all of her cost-cutting during the months leading up to tax season is saved up and then used to help keep the couple out of debt when covering their state income taxes.

“At least we know it’s coming and are able to cover it with planning,” Amy says.

*Subject asked to be identified with a pseudonym to protect her privacy.