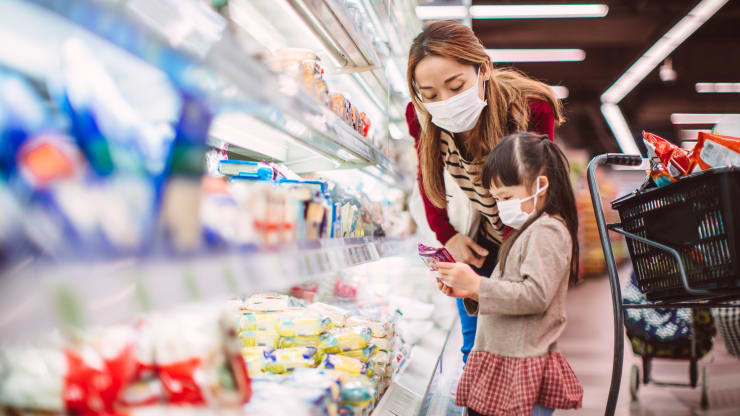 From jobs to savings to retirement plans, the coronavirus pandemic has upended many Americans’ financial lives.

While millions are still unemployed and many have seen their emergency savings run dry, it isn’t all necessarily negative. Many are saving more and spending less.

In fact of those surveyed in a new CNBC + Acorns Invest in You survey, 46% said they are “more of a saver now” compared to before the pandemic. 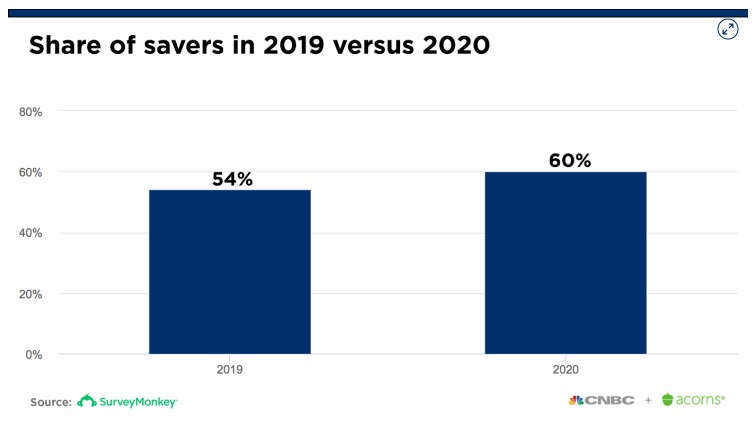 About half, or 49%, said their monthly spending has decreased, compared to 33% last year.

Some of those savings can be attributed to the fact that people stayed home and didn’t do things like dining out, said personal finance expert Jean Chatzky, co-founder of HerMoney.

“We learned how to go to the grocery store not every day, but once a week, which meant meal planning and shopping with a list and those are fabulous money-saving skills,” she said. “We learned which of our subscription services we actually watch and which ones we don’t.” 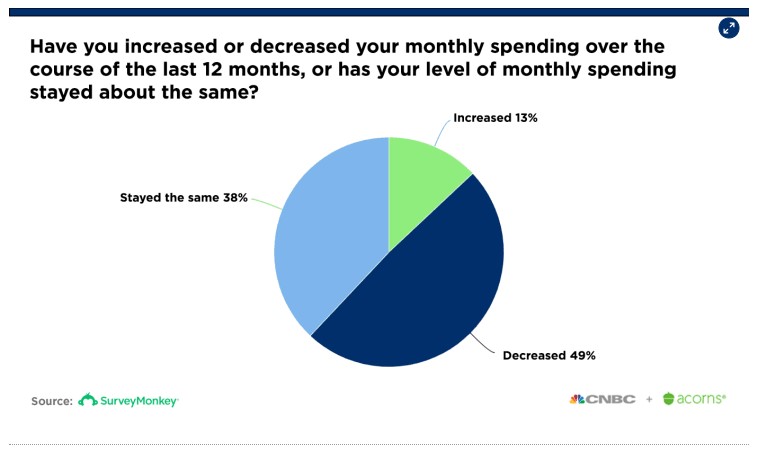 Winnie Sun, managing director of Sun Group Wealth Partners in Irvine, California, said she has clients who are spending less money. That, in turn, has them feeling a sense of urgency. Her firm’s client meeting schedule is up substantially since the pandemic began.

“We have seen an uptick in an interest in investing,” said Sun, a member of the CNBC Financial Advisor Council. “They are seeing their checking accounts getting larger and they think that money is not earning enough for them.”

Millennial Stacey Kelly is one of those savers. The Los Angeles-based content producer has managed to save about $800 to $1,000 every month since the pandemic began.

“I didn’t realize how much money, especially in L.A., that I was spending on food and on my hair,” she said. “Once the pandemic hit, I had to start cooking for myself and doing my hair myself.”

As an African-American, Kelly said her hair is a big part of her identity. So she went to the salon every week for a wash and blow dry. She also used to eat out often, go shopping and buy Starbucks coffee. While she managed to save money by having a set amount automatically transferred into a savings account, she was dipping into it every month for living expenses.

“I literally sat down one day and went through all my finances and made a spreadsheet,” Kelly said. “I got to really see the numbers and I was shocked.”

Stacey Kelly has increased her savings during the coronavirus pandemic
Source: Stacey Kelly

She’s now putting money aside into an online savings account and her Roth individual retirement account. She’s also saving for a trip to France once the pandemic ends and ultimately wants to buy a condo.

“I have all these buckets for savings,” Kelly said. “It just feels good because I can actually put money in it now.”

People have also cut back on spending because of concern over the economy, the survey found.

Of those who said they cut spending, 53% said worry about the current economic situation was the reason they cut spending, and 26% said it was because of a loss or decrease in a source of household income. Additionally, 16% feared another stock market downturn and 14% lost their jobs. 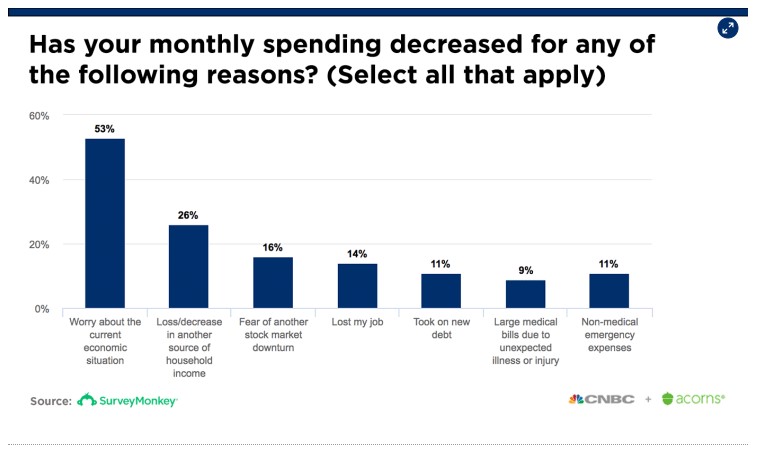 The pandemic has also caused Americans to postpone spending money on a vacation (54%), remodeling or renovating their home (15%) or buying a car (14%), the survey found.

Those who had an increase in spending cited the cost of essential items going up (51%) and shopping due to boredom (24%) as the top reasons.

Some Americans turned to their rainy day funds for much-needed cash.

Since the pandemic began, 14% of Americans wiped out their emergency savings. That would amount to as many as 46 million people.

Others took measures like borrowing money to cover everyday expenses (11%), stopping contributions to their 401(k) plan or other retirement accounts (6%), or asking for rent relief or a delay (5%). Only 4% took an early withdrawal from their 401(k) and 3% borrowed from their 401(k).

While Sun believes a second stimulus package “needs to come sooner rather than later,” those in dire financial straits should also look to find ways to bring in income.

“Liquidate the things you don’t need in your house,” Sun said.

“Focus on the top three: shelter, food and medication,” she added.“Everything else has to go on the back burner.”

When it comes to saving for retirement, most Americans (67%) said pandemic didn’t disrupt their plans and 19% are not sure how the crisis will impact their retirement.

However, there is greater uncertainty among those who work part-time or are unemployed. Almost a quarter, or 23%, of part-time workers and 32% unemployed people looking for work said they are unsure of the impact.

Of those who are unemployed and looking for work, 15% are actively making plans to delay their retirement.

Many Americans also don’t have money put aside for their children.

Almost one-third, or 32%, said they have a savings account and 13% have a 529 plan. Meanwhile, 8% have savings bonds, cash or certificates of deposit (CDs) and 7% have an IRA or Roth IRA set up for their children.

One big issue parents face when saving for their children is overthinking it, Sun said.

“Don’t be so hard on yourself,” she said.

Parents can start at just $10 a month being automatically pulled out of their checking account into a savings account. Once it grows bigger, then decide what to do with it, like putting into a 529 plan, she advised.

“Just start and everything else will fall into place,” Sun said.