Yes, annuities provide valuable tax-deferred growth. But for more than any other reason, annuities are valuable because of their guarantees. In an annuity, the insurer makes certain contractual guarantees that are not available in a traditional investment product.

There are two things you need to know if you’re an annuity owner or considering a purchase if you want to understand whether you can lose money. First, what kind of annuity do you own or are you considering purchasing? Second, what is the financial strength rating of the insurer?

In this article, we’ll help you gather the information needed to answer both of these questions.

What Kind Of Annuity Do You Own?

Let’s start by looking at the two types of annuities — fixed (including fixed indexed, fixed rate, and income) and variable annuities.

Fixed annuities — as defined in regulatory parlance — include indexed, fixed rate, and income annuities. For a time, the SEC attempted to treat fixed indexed annuities as securities, but was unsuccessful in this attempt. Indexed annuities guarantee that you won’t lose money, but your ability to gain money is typically a function of the performance of market indices. You don’t actually own the market index, unlike with a variable annuity. The value of the indexed annuity will go up the better the market does (but typically not by as much as the market goes up), but it won’t go down in the case of a large market drop.

With traditional fixed annuities (sometimes also referred to as fixed rate annuities or MYGAs), you never lose money if you hold the policy to maturity and don’t withdraw early (thereby potentially incurring early withdrawal penalties). The rate you are quoted for the guarantee term when you buy the policy is exactly what you’ll get — no more and no less. The fixed annuity has a typical duration of 3-10 years, over which period the rate is guaranteed and, at the end of which period, the funds can be withdrawn or rolled over into another annuity without penalty.

In a basic life-only income annuity, the payments are a set amount and they continue at that exact level for as long as you’re alive. Although your payouts are preset and guaranteed at a specific level, you could lose money if you died younger than expected. You can protect against this unfortunate occurrence by purchasing an income annuity that includes a death benefit (a.k.a. a cash refund), which will give your beneficiary the balance of your principal that has not been returned via income payments as a lump sum upon your death.Traditional fixed and income annuities are the only kinds of products we have on the Blueprint Income platform. 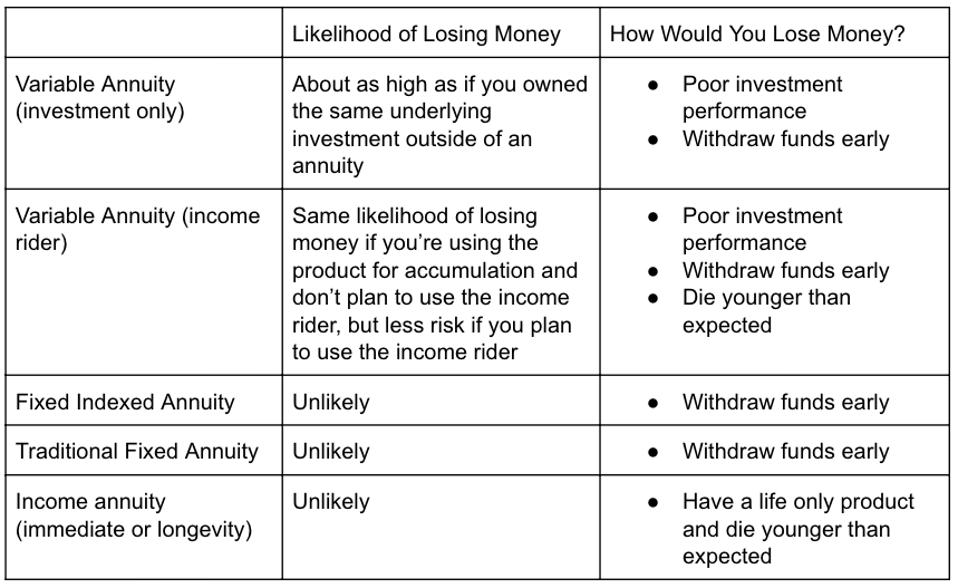 What Is The Financial Strength Rating Of The Insurer?

Once you’ve figured out what product you have, and therefore what the nature is of the contractual guarantee you hold, the next step is to find the insurer’s financial strength rating and decipher what that means. Almost every annuity company will have a rating from A.M. Best. Below is a summary of what those ratings mean. 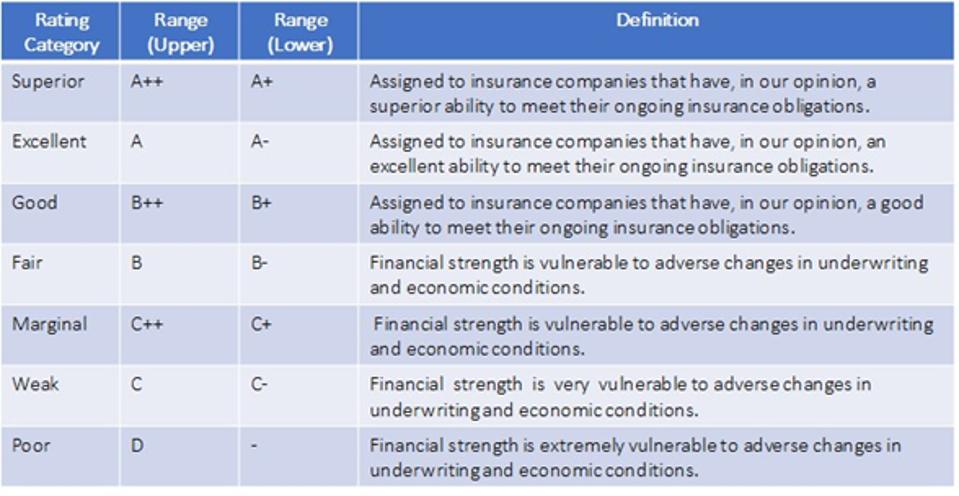 All else equal, the higher the rating, the more likely it is that the insurer will actually be able to follow through on the contractual guarantee they make to you. I recently wrote a longer post about the financial strength ratings of annuity companies and the most important things you need to know. You can read that here.

Yes, it’s possible to lose money with certain kinds of annuities. All else equal, if (1) the market underperforms and you own a variable annuity (2) you have a life-only income annuity and you die earlier than expected; or (3) the insurer is insolvent and the backstop provided by the state guaranty fund doesn’t kick in (either because you’re over the per policy limit or for some other reason), then you could lose money on the annuity.

However, these are edge cases. Of the annuities discussed here, only the variable annuity without an income rider represents a similar risk of loss as owning a mutual fund or ETF of equities.