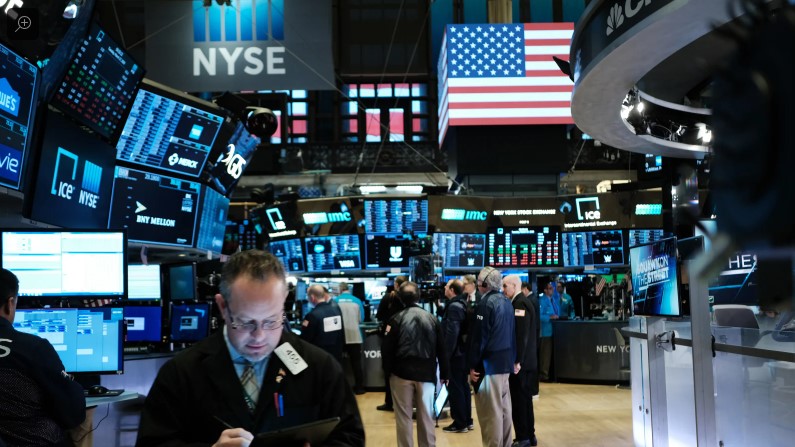 So you’ve started a new job and the company offers stock options as part of its benefits package. Maybe you have no idea what that means, or you’re not quite sure how to get started. Here are some basics you should know.

Most companies offer perks as part of a salary package: vacation days, 401(k)s and, in some cases, the option to invest in company stock. Usually, this is in the form of an Employee Stock Purchase Plan (ESPP) or an Employee Stock Ownership Plan (ESOP).

With either one, the benefit is the same: You profit when the company profits. Obviously, the flip side of that is: if the company doesn’t do so well, your savings can plummet.

With both an ESPP and an ESOP, you share in the company’s success.

Companies offer these as part of your benefits package, and while they can be a solid benefit, your employer also uses them as a way to foster employee loyalty.

And in some cases, they’re offered in lieu of higher pay. For example, startup companies often offer these benefits because they may not be able to pay workers an average salary.

Beyond the basics, these two plans are pretty different; the main difference is in how they’re funded.

With an ESOP, your employer buys stock for you. When your benefits kick in, those stocks are yours. But you don’t have access to the money earned from them until you retire or leave the company. In this way, it’s similar to a 401(k) plan.

With an ESPP, you contribute to the plan yourself through payroll deductions. This means part of the money from your paycheck will be taken out to buy company stock and save in that plan. The good news is you’ll have access to the money sooner—you don’t have to wait until you retire.

The pros of buying employer stock

Obviously, an ESOP is beneficial because the company is just giving you free stock. It’s an inherent employee benefit.

With an ESPP, you’re paying with your own money, but there are still benefits. For one, many employers will offer a match. Meaning, for every dollar you invest in the plan, they’ll match you up to a certain percent. They’re still giving you free stock, just with a caveat that you have to buy in too. If the company does well, you could earn a big return, considering that some of the stock was free.

Plus, some employers even offer discounts on their stock. This means you can buy their stock for as much as 15% less than it’s trading on the market. That’s a pretty good deal, because when the stock grows, you’ve earned more than a regular Joe who invested in your company at full price.

Even better, some plans include a lookback provision, which could result in an even bigger discount. With a lookback, you’re offered the stock at its lowest price during the offering period (the period that you’re allowed to buy the stock—more on that later).

Of course, the market fluctuates, and so will the value of your company’s stock. But you’re still buying it for less.

The drawbacks of buying employer stock

One of the most important caveats about these options: You don’t want to be over-invested in your company. Yes, the returns can be tempting. But when there’s a potential for high reward, there’s almost always a potential for risk. If the company tanks, your returns don’t really matter.

We’ve told you how to build a solid “buy and hold” portfolio, and one of the most important steps is staying diversified. It’s not smart to invest too much in a single asset. You want to be invested in a variety of companies, markets, industries and even financial vehicles.

Even if your employer offers a discount, you don’t want to have too much invested in your company stock. Yes, most experts recommend taking that employer stock match, if offered. But not at the expense of over-investing.

The bottom line: You don’t want your entire income stream to be dependent on a single company.

How much should you contribute?

As a general rule of thumb: Don’t invest more than 10% of your portfolio in your employer stock.

Even if your employer offers a match, you might not take them up on the full amount. It’s more important to invest your money wisely than it is to get that discount.

Also, the closer you are to withdrawing the money, the less you’ll want to invest. Yahoo Finance suggests reducing the amount to 5% if you need your money in the near future.

With that much invested in a single company, you have a greater responsibility to monitor its health.

You’ll want to research the company like you would any other investment. USA Today suggests you compare the company’s return to competitors, read any recent news about the company and read reports from analysts. If there’s news that your company may be acquired, you might want to consider selling that stock or you might hold out for a higher buy-out offer. If the company isn’t doing so well, you might consider selling before it hits rock bottom.

Of course, there’s a lot more that goes into active investing, and some would recommend you hold in those situations. But this kind of proves the point: Active investing is risky, which is why you want to limit how much you’re invested in employer stock.

Know when to sell

Another thing to keep in mind with a purchase plan: you don’t have to buy and hold. It’s not a retirement plan. Once you’re vested (more in that in a minute), the stock is yours to sell.

Of course, if the stock price goes up after you sell, you might be kicking yourself. But don’t kick too hard, because you still nabbed a big return, and freed up your portfolio for more diversification.

With either option, your company probably has a vesting period. This means that even though you can participate in the plan, you don’t completely own all your stock until a certain amount of time has passed.

For example, with most ESOP plans, you’re not vested at all when you’re first hired. After a year, you might be vested at 20%. After six years, you might be fully vested.

If you leave the company before you’re fully vested, you only get the percentage of stock that you’re vested in at that time. The rest goes back to your employer.

With an ESPP plan, you’re simply not allowed to sell your stock until you’re vested.

How to enroll in your plan

With an ESOP, you’re usually automatically enrolled when you’re hired. When you quit, you’ll probably want to roll over your shares into a retirement account, the same way you would with a 401(k). But we’ll get into those options later.

With an ESPP, enrollment is a little more complicated, but it’s still pretty easy. There are a few useful terms to know:

Once you’ve decided to participate in the plan, you’ll enroll at the next available offering date. You’ll fill out an application and indicate how much you want to contribute. Usually, this amount is limited to about 10% of your after-tax pay. (The IRS also limits contributions to $25,000 per year.)

Once the offering period begins, money will be deducted from your paycheck until it’s time to buy the stock on its purchase date. Once that date hits, you’ll have an account that includes your stock purchase.

What to do when you leave the company

If you quit a job where you had an ESOP, your employer has six years to start distributing your benefits. At that point, you have a few options: defer distributions until you retire, roll over the distributions into an IRA or cash out. If you cash out, you’ll pay taxes on this amount, and it’ll be taxed as ordinary income. If you cash out before you retire, you’ll also pay a 10% “excise tax,” according to the National Center for Employee Ownership.

ESPP contributions are made with after-tax dollars. The money you’ve used to buy the stock has already been taxed, thus the IRS doesn’t care when you cash out your ESPP. As long as you’re fully vested, that money is liquid: you can take it out whenever you want.

Of course, if your company has been profitable, you’ve probably earned a return on your stock. This return is called a capital gain, and you will pay taxes on that when you cash out. But with most ESPPs, you’re taxed at a special “capital gains rate,” which is probably lower than your income tax rate.

Each plan, whether an ESOP or ESPP, also has its own individual rules for cashing out and distributing benefits, so you always want to check your plan’s summary for more detail.

Overall, employer stock plans are a great benefit, but one of the most important factors to keep in mind is diversification. You don’t want the majority of your net worth tied up in your company. Monitoring is also important: Even after you leave a company, you want to pay close attention to its performance if you’re still invested in its stock.

By all means, take advantage of this benefit, but not to the point that it keeps you from having a healthy, diversified investment portfolio.